Sometimes getting into a pickle is a blessing in disguise…

This was the first thing I wrote in my journal the day after I had arrived in Trujillo, Peru. Super late the night before I was potentially going to sleep homeless on the street because I had failed to know that small domestic airports close down after the last flight at 11:30pm. This news meant that I could not sleep in the terminal as I had planned. Now I don’t mind airport pimpin’ because I can nap, catch up on my journal, and just go through deleting unwanted pictures from my camera. (Airport Pimpin’: I call it this because I take advantage of the airport facilities in return for my own safety and source of shelter. The traveling price for getting a cheap flight is that I sometimes have to sleep in an airport for a 24hr layover on occasion).

My goodness was I glad a taxi driver, that I was reluctant to trust, drove me to the only hostel open past midnight, El Mochilero. Just as a warning, be very careful with taking taxis around Peru especially as a solo female traveler. I highly advise using public transportation as a safer alternative. In this situation I had no choice and you bet I was highly aware of what was happening and the decisions I was making. Besides all that, I discovered the most adorable hostel and humble staff at El Mochilero. Yes, I would recommend anyone to stop in for a night or two if you happen to be in Trujillo. I adopted a Spanish quote written on their walls that has been with me ever since, engraved on my mind.

I had the privilege of staying in this antique Spanish colonial dorm for 25sols, which is about $8 U.S. If you have time to kill, walk around the main plaza of Trujillo where all the colorful buildings are and great eateries. Then take a bus ride over to the Chan Chan ruins. Again my trek to the ruins was not planned. It was something I stumbled upon while trying to decide what I could do before going to the surf spot, Chicama. For an explorer, I found this to be a treasure. Most people think of Machu Picchu when it comes to Peru, but a lesser-known civilization although not related to the Incas, is Chan Chan. This visit is the opposite experience of what you would find at Machu Picchu with the high elevation and cold temperatures of the Andes Mountains. Instead it is a hot and desolate desert with sand dunes next to the ocean. What a vast difference from Cusco. I also was not prepared for the oncoming sickness from flying between extreme elevations and contrasting weather systems in a matter of 2 hours. And if anyone knows how exhausting traveling can be, it is easy to get sick just from physical and mental fatigue.

I caught a bus van for 1.5sols to the Chan Chan ruins, 15 minutes away [from the Trujillo plaza]. A taxi would have costed 20sols. Chan Chan entrance is a mile walk from the road where the bus dumped me off, fee of 10sols, and walked around on my own. 40sols to get a guided tour. Sunny, windy, could hear ocean waves on the other side of the walls, but couldn’t see them. Ruins are right on the beach. Loved feeling warm sun on my skin again. Place was huge. Desert sand, but intricate line designs with bordering birds, fish, stairs, medallion circles, plus guard statues. Interesting city ruin, solitary moments to myself… mountain plains to desert dune beaches. Where am I?

There’s something unique about wandering. Because in wandering, we wonder. And to wonder is an extension of our thoughts and curiosity. As I was zigzagging around the mudstone walls for a few hours, I was amazed that Chan Chan was all done by hand; pure manpower labor. The people of Chan Chan emulated what surrounded them into idols of worship. Objects in nature became sacred symbols of the temples such as sea birds, fish, water, circles, and nets. This is apparent when you stroll around and observe the designs sculpted into the mudstone corridors. From an artist point of view, I can see the patience and undeniable ambition. One can appreciate the craftsmanship and architecture, because it is no easy task. I recommend anyone to experience for him or herself the mind-blowing archeological site of Chan Chan.

Today’s reminder: Sometimes unexpected situations can be a blessing.

FYI gates close at 4pm so there’s plenty of time for fun in the sun at Playa Huanchaco for the rest of the day (5 minutes south of the ruins) or catch a late night departure flight out of Trujillo to your next destination (airport 10 minutes north of the ruins). 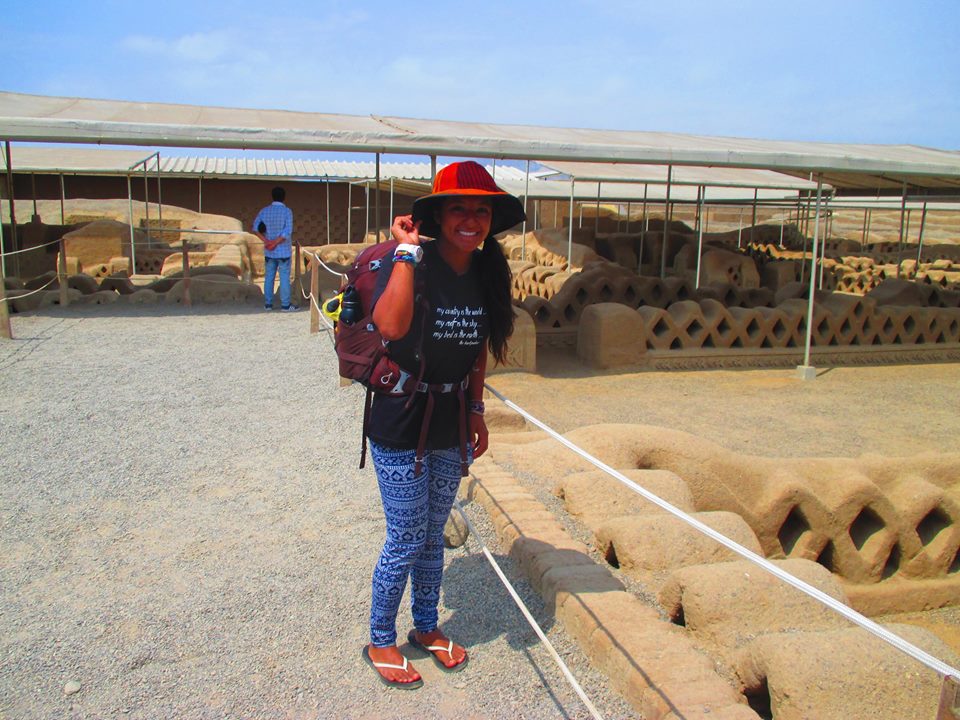